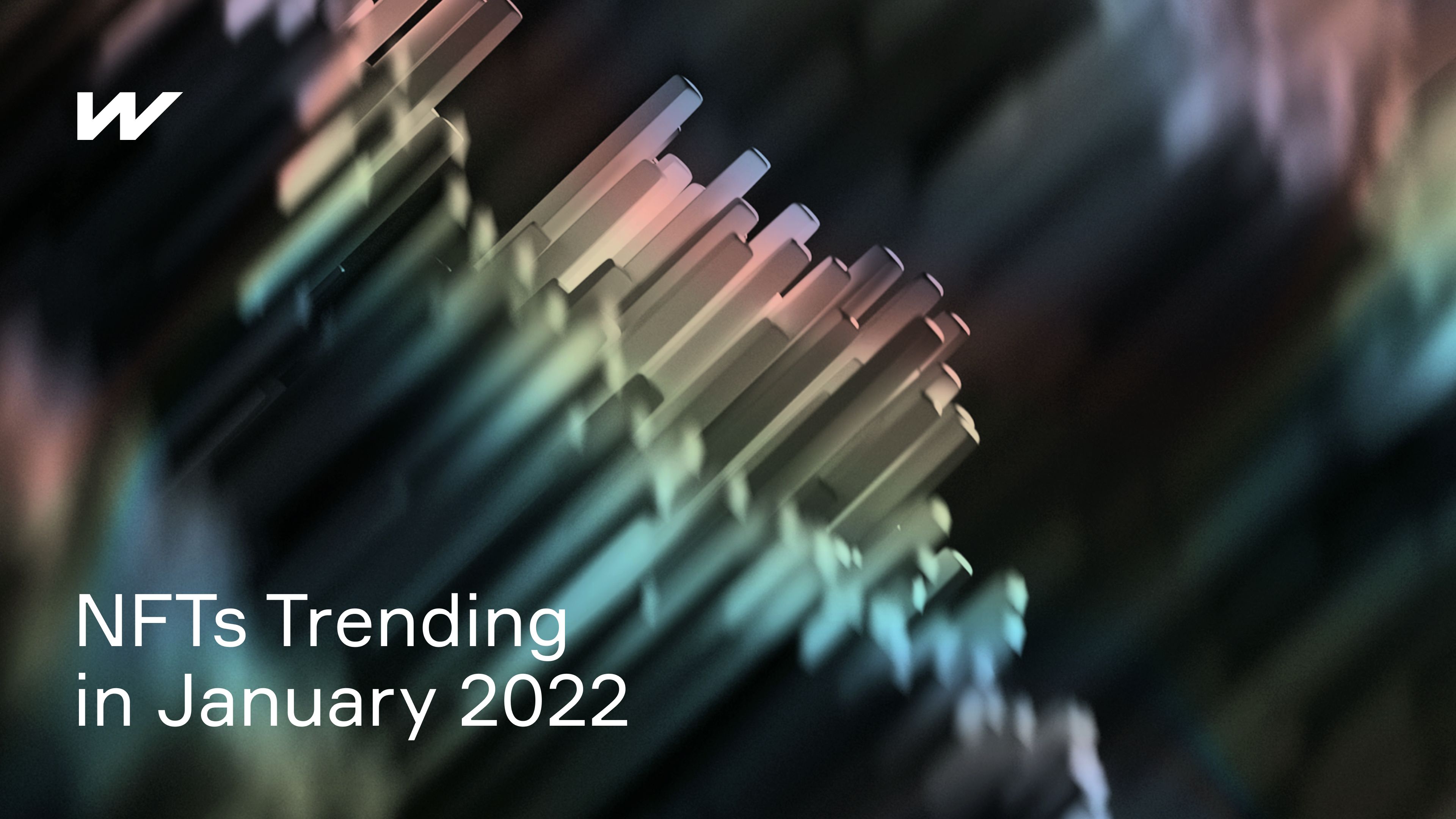 The NFT craze has officially entered ATH territory. After a breakout year for non-fungible tokens, it seems investors and crypto enthusiasts just can’t get enough of it in 2022 either.

We’re barely reaching the end of January and OpenSea, the world’s largest NFT market, is already reporting record-breaking sales on track to make the biggest month yet for NFTs. From fan favorite collections to newcomers bursting onto the crypto scene, here’s a list of the top 10 most exciting NFTs that are trending this January. 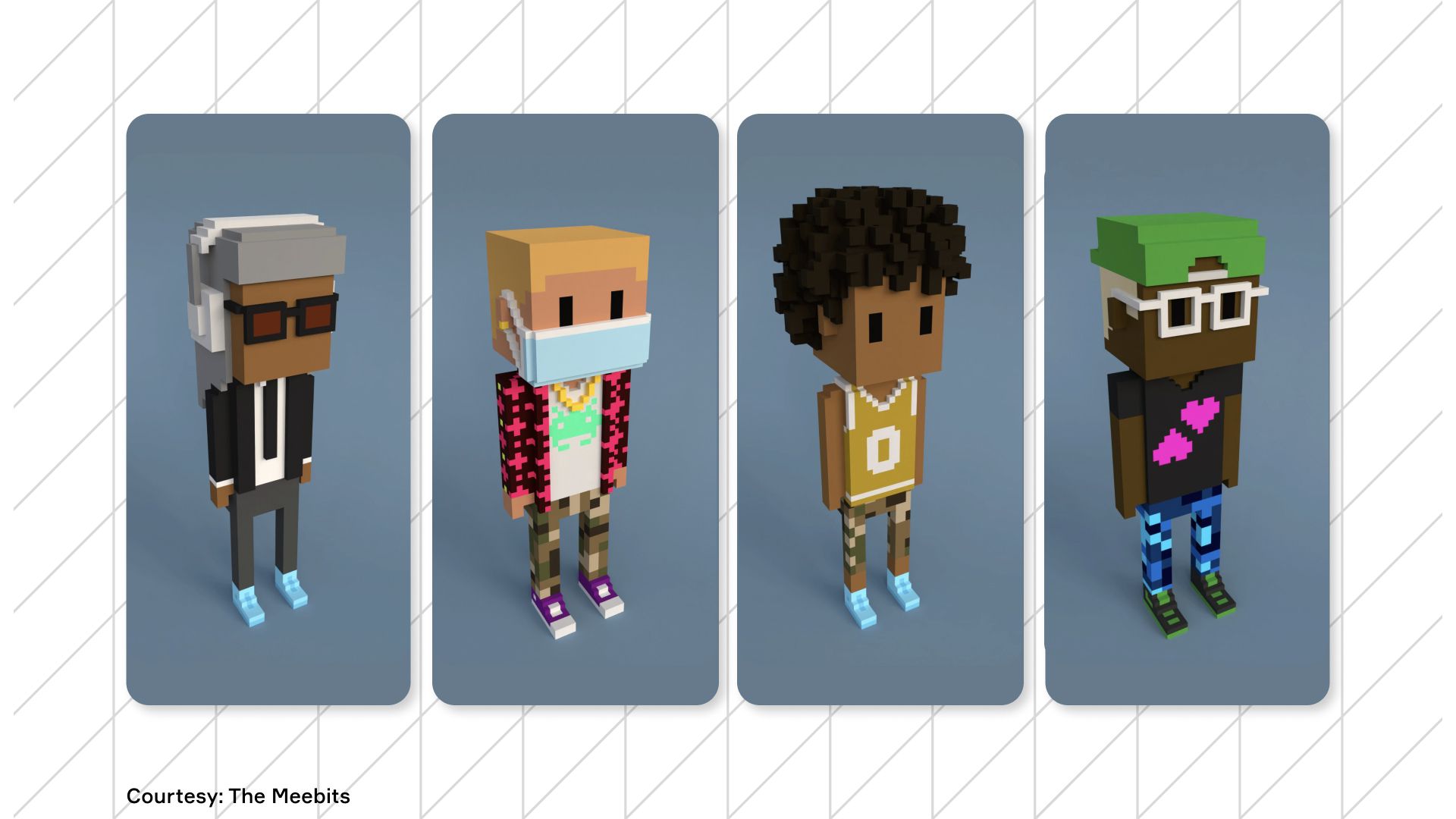 Larva Labs has an established reputation as the creator of the hyper successful CryptoPunks NFT collection. But the company has looked beyond its golden goose to release yet another promising batch of NFTs - Meebits. Crypto enthusiasts might be pleased to recognize an overall theme not too far off what you'll see with the CryptoPunks, as this NFT collection consists of 20,000 pixelated 3D avatars, each with unique characteristics and levels of ‘rarity’. After being first launched in May 2021, Meebits have been steadily gaining popularity and are now one of top trending tokens of 2022. The average price for one Meebit is $13,900 and the most expensive of these NFTs was sold for $416,000. 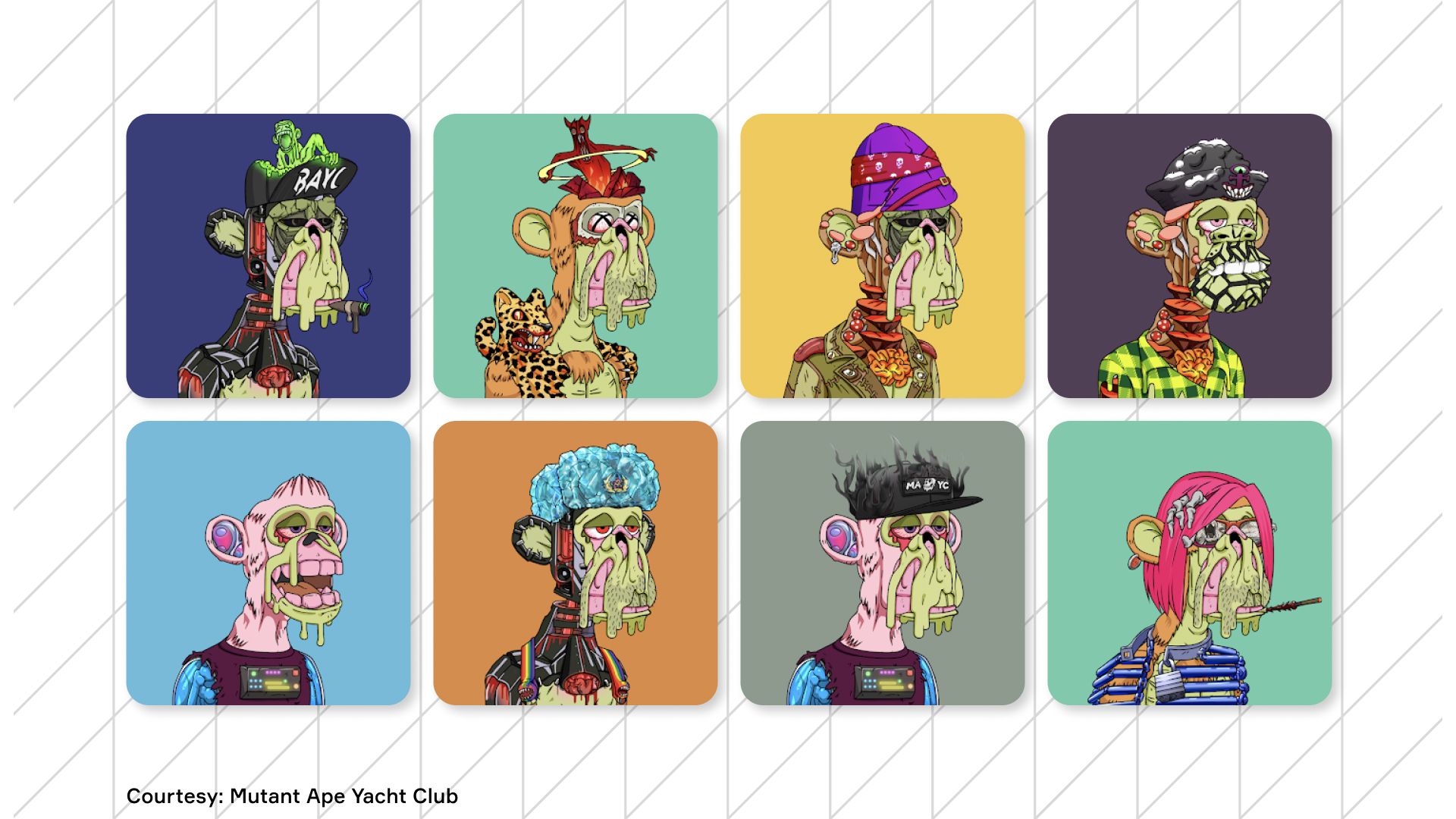 You know about the insanely popular Bored Ape Yacht Club ( quick check on Eminem’s Twitter profile ) but how about its gorier spinoff, the Mutant Ape Yacht Club (MAYC)? According to the creator, Yuga Labs, this is a 20,000-strong Mutant Ape collection and each NFT can only be created either by exposing an existing Bored Ape to a mutant serum or by minting a new one during the public sale. For those lucky to have a Bored Ape NFT, their token can be exposed to one of the three ‘serums' available and this leads to a completely new Mutant Ape NFT as a result. Depending on the ‘serum’ ingested, Bored Apes can either retain some of their original traits or become a barely recognizable version of the original NFT. And no, there’s no need to worry as the Bored Ape token won’t be harmed. Holders of these NFTs can also count on extra perks like a membership card to the prestigious Yacht Club through which they can enjoy exclusive invitations to events in the digital world. It’s an exciting twist in the world of NFTs and while the Mutant Ape Yacht Club has been blowing up for quite a while, the race for one of these tokens is reaching fever pitch in 2022, with the average price for one of the Mutant Apes currently being $50,300. 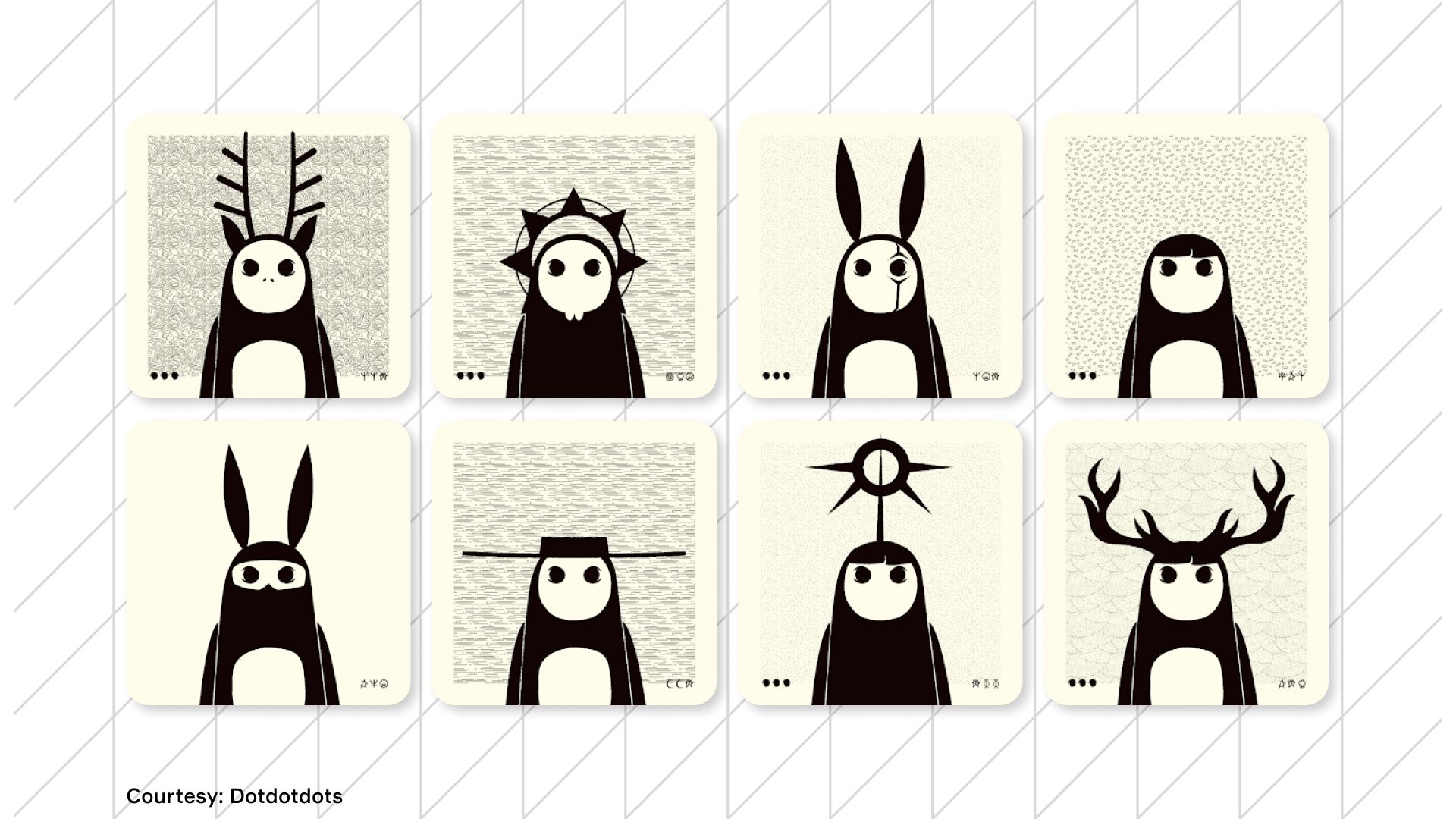 This NFT collection is more mystery and guesswork than anything else. But that’s perhaps why Dotdotdots have become one of the top trending NFTs in January 2022. They’re described by the creator as “strange cultish creatures that live inside solidity. They disguise themselves as decimals in the code and are rarely seen naturally by human eyes. They are often referred to as bugs, but their species is unknown.” Confused? Yes, we are too. But the fact is that since being first released, without any marketing or fanfare back in August 2021, Dotdotdots have puzzled the crypto community with its runic symbols, minimalist visuals and a somewhat frustrating lack of guidance on what these NFTs really present. It’s safe to assume that not knowing what the heck is going on is also part of the fun. At least buyers seem to think so. The first mint created 4360 dotdotdots, but more will be minted with the rise of Ethereum prices, with a cap of 10,000. 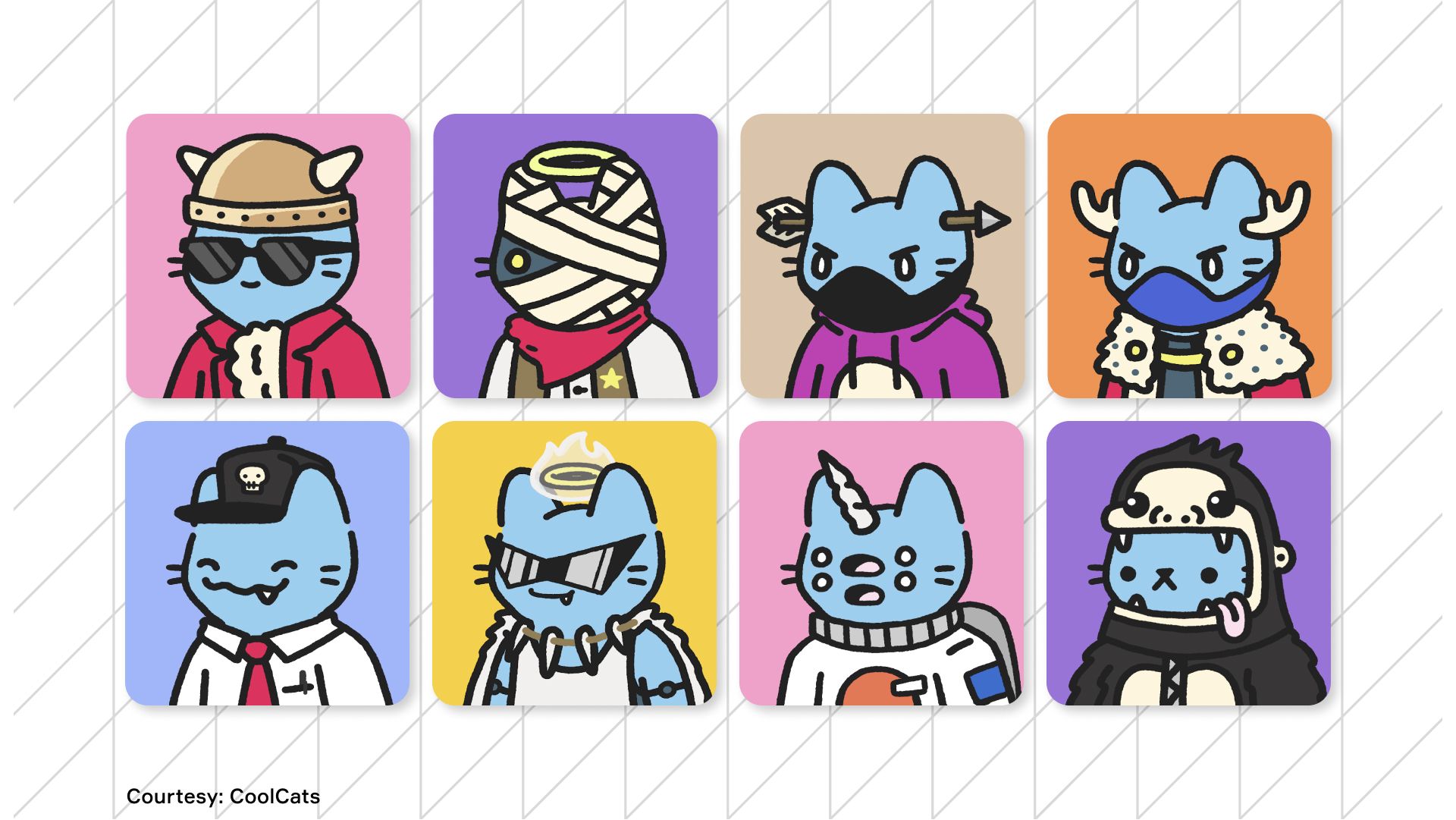 One thing the NFT world can’t seem to ever get tired of is cats. It’s easy to see why - they’re fluffy, uber cute and everyone loves them. Digital cats aren’t any different. There have been games and NTFs like CryptoKitties already spearheading the feline trend, but there’s another game you should get familiar with if you’re into all things NFT. Launched in 2021, CoolCats is raising the game to a new level and getting a lot of interest as of late, no less because some of its ‘rarer’ cats have sold for over one million dollars). The whole collection consists of 9,999 CoolCats with unique variations, like quirky outfits and facial expressions. The developer of these NFTs has also hinted at a breeding option in the future, which would make the NFT project even more interesting - and valuable, of course. 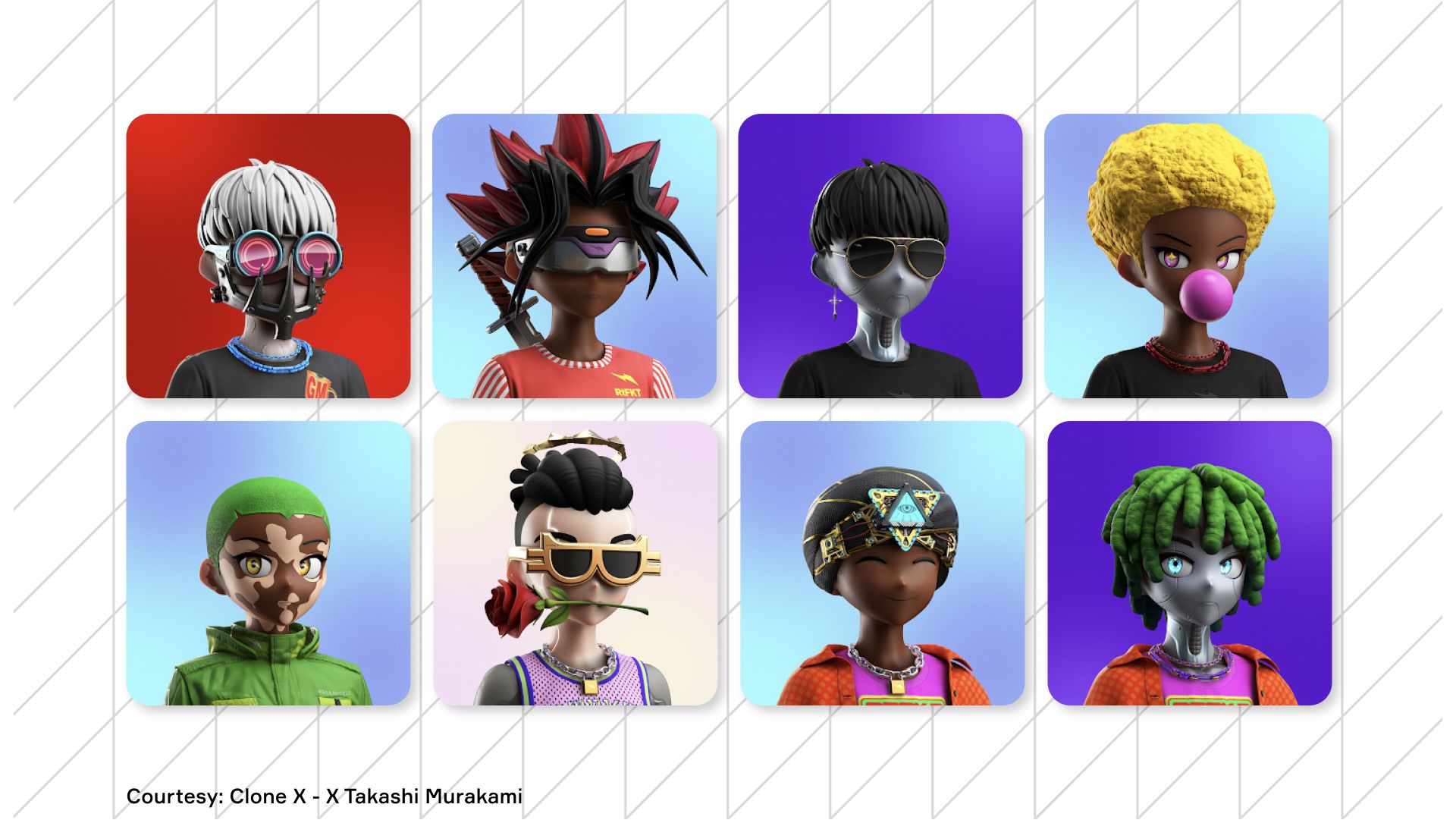 RTFKT has achieved cult status as the studio behind some of the most exciting NFT digital fashion collections of 2021, but it’s taking over the new year with an NFT avatar project in collaboration with iconic visual artist Takashi Murakami. 'Clone X' is a collection of 20,000 randomly generated 3D avatars, described as “avatars and traits to merge all the things we love, from anime to sci-fi and streetwear.” A major reason to take a closer look at ‘Clone X’ is the fact that NFTs will be eventually compatible with NFT-based games, metaverse environments, online meetings, and across many other digital platforms. With these two powerhouses coming together to launch this collection of digital assets, no wonder it’s quickly becoming one of the most-talked collections in the NFT space in 2022. 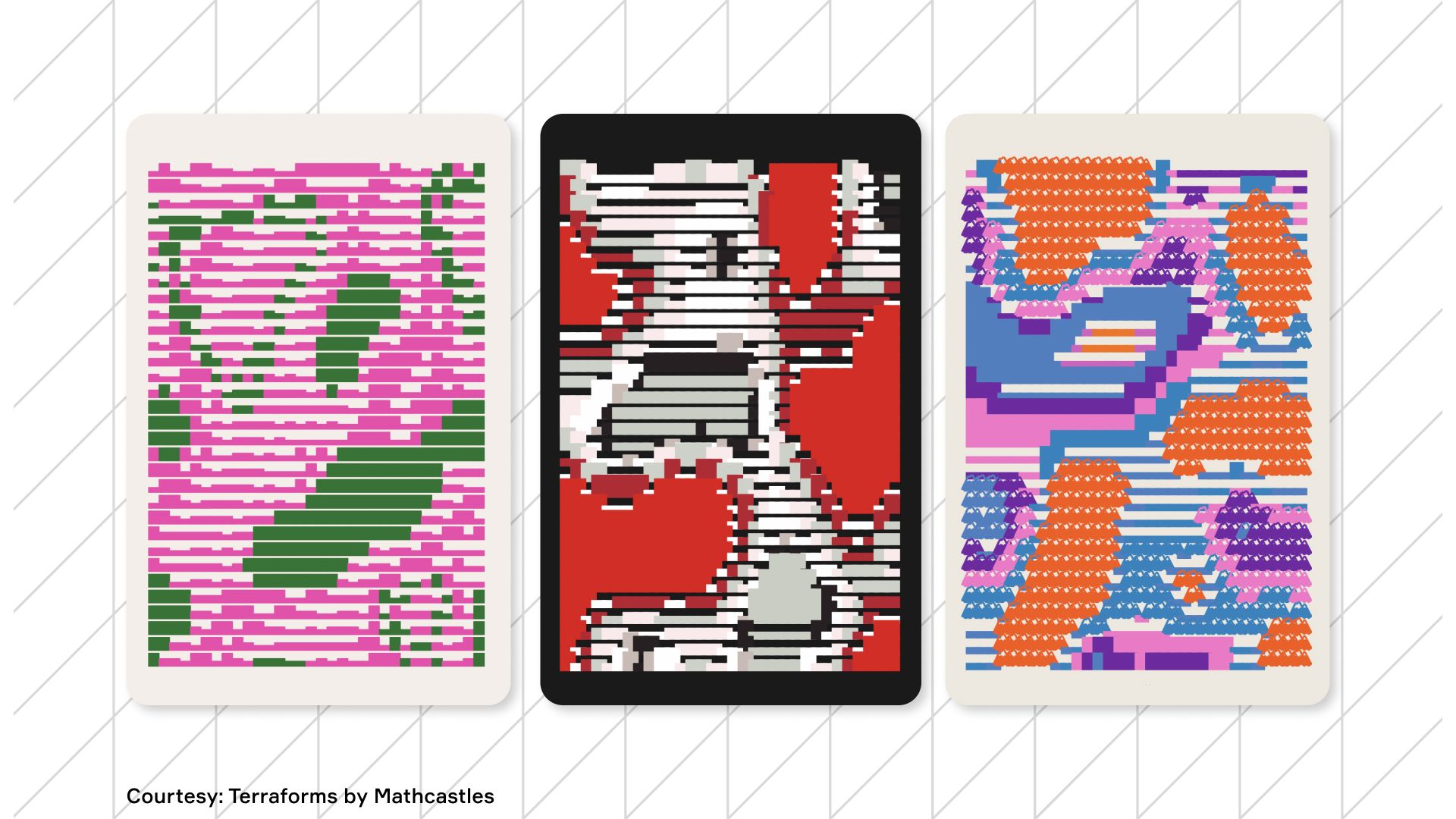 Away from cats and apes, Terraforms is an Ethereum-based NFT collection focused on the intriguing concept of on-chain land as a digital art form. Terraforms virtual world that takes shape as a 20-level 3D castle divided into 11,104 unique NFT land plots. As expected, each plot has unique characteristics that are then linked to art elements like a color palette, shapes and other 3D elements. Since it was released last December, this blockchain technology project has seen the average price per plot of land increase by as much as 2500%. 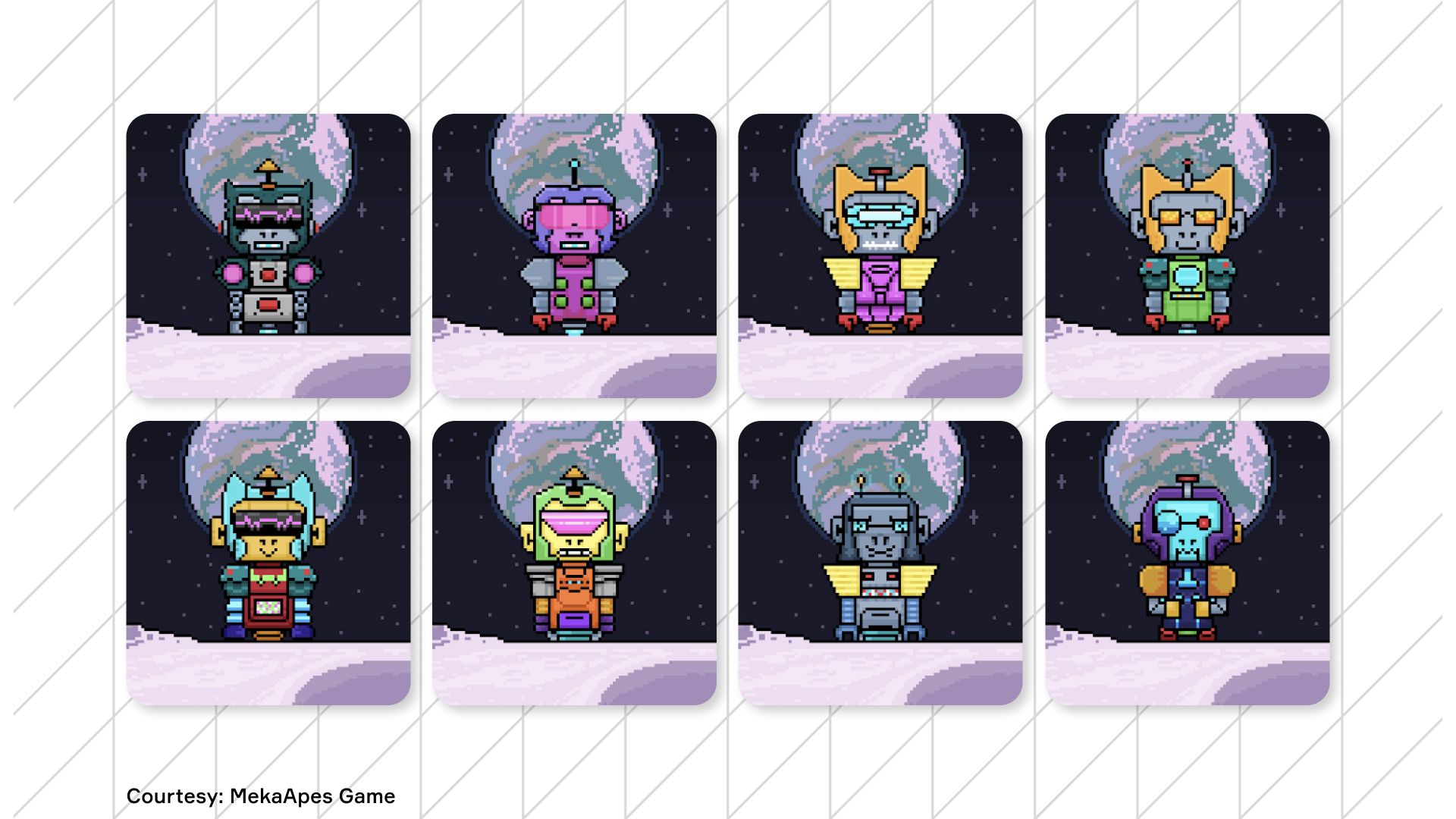 The return of the Apes... The NFT scene is full of these animal-themed avatars, but MekaApes are in a league of their own. As part of the OogaVerse world, the MekaApes Game is an exciting blockchain experience that features evolution, fusion and a unique levelling-up system. Its creator bills it as “the most in depth strategy game available on the Ethereum blockchain” and it’s living up to the hype as one of the top trending NFTs in 2022. There are currently 10,000 MekaApes available, but the total total supply of Stage 1 of the game will be 55,000 NFTs. 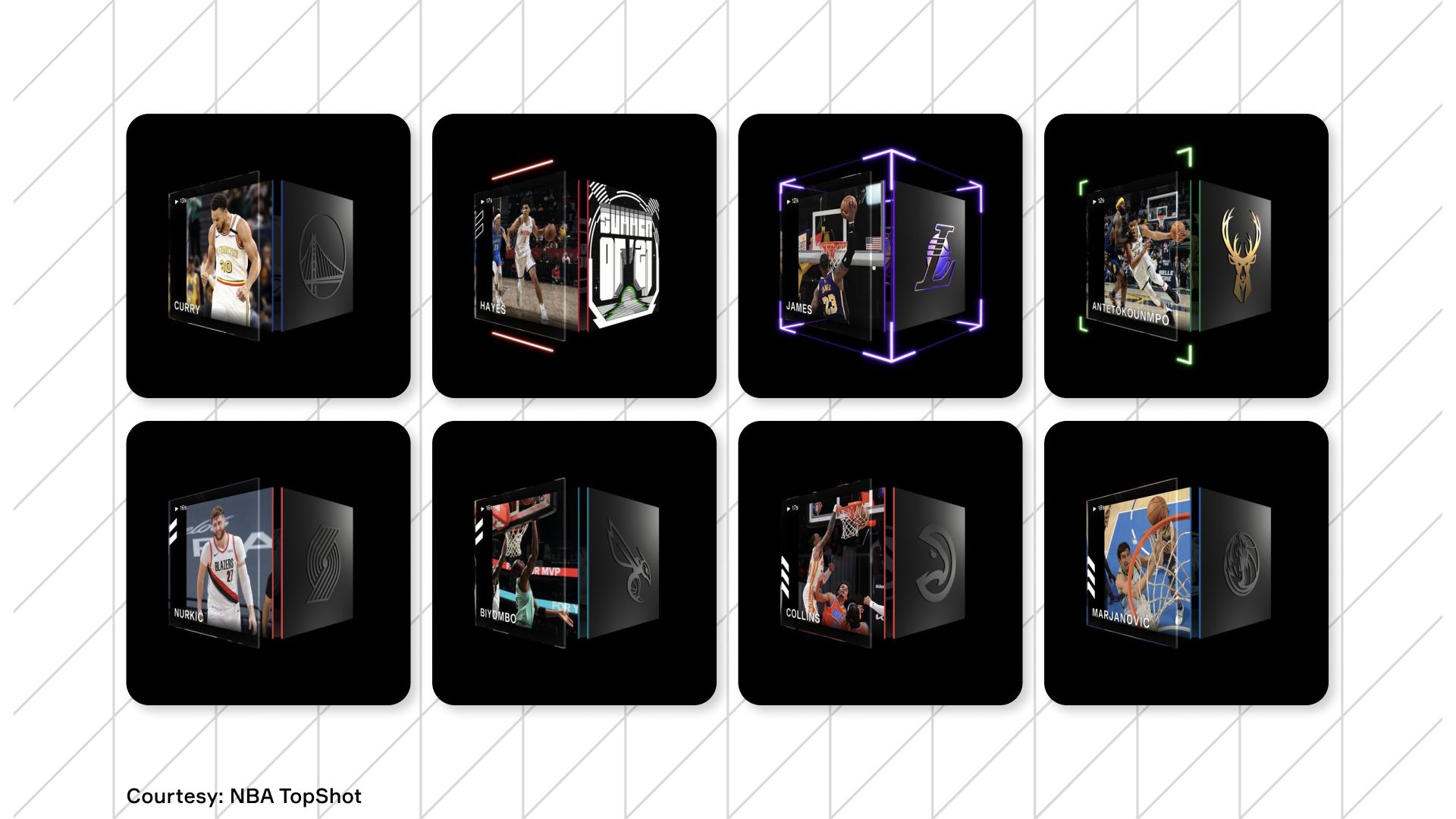 At this point, the NBA TopShot needs little to no introduction. The non-fungible token marketplace is considered by many to have been the first platform to truly put NFTs on the map after Dapper Labs managed to seal a very successful (and massively lucrative) deal with the NBA and sell NFT collectibles of the league’s most memorable sports moments. TopShot NFTs have shot up in price by as much as 72% in the last month alone, with sales exceeding $3.5 billion so far in 2022. And there’s no end in sight to the NFT craze as Dapper Labs continues expanding its reach to other sports leagues and categories. More recently, NBA TopShot proved to be on top of the biggest NFT trends with the launch of UFC Strike, focused on catering to fans of the mixed-martial-arts with NFTs of iconic UFC moments by superstar athletes like Amand Nunes, Francis Ngannou and Michael Chandler. It’s proven to be so popular that the first pack of 100,000 NFTs sold out within hours of being released. Clearly, NFTs don’t get any trendier than this. 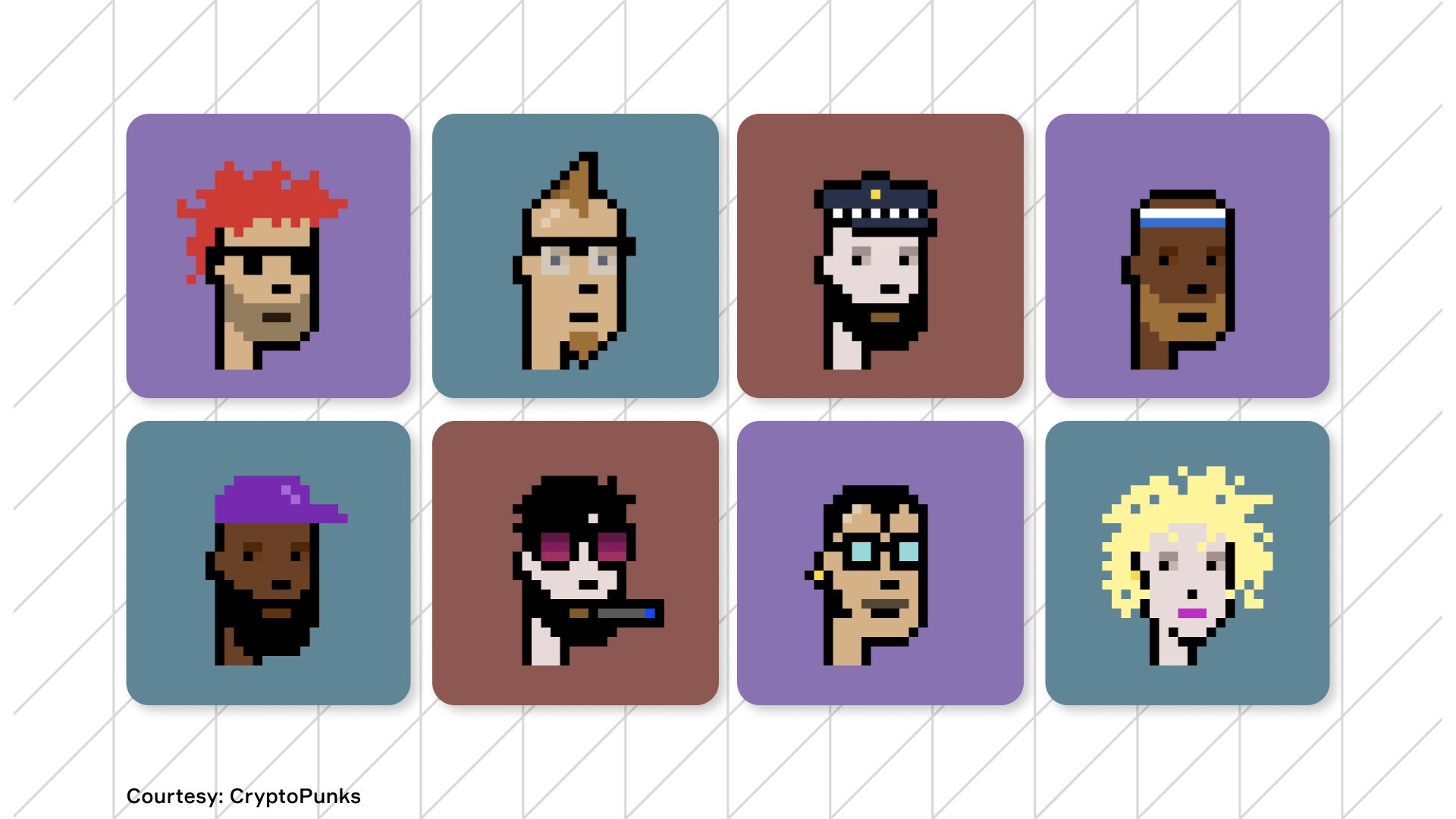 Originally released in 2017 by Larva Labs, this assortment of pixelated avatars, or CryptoPunks, were the first NFTs to be minted on the Ethereum blockchain and have gained popularity over the years for their uniqueness (there are only 10.000 of them available) and creativity, with each CryptoPunk sporting different accessories, backgrounds, colors and even having special features like being a zombie or an Alien. Also fittingly, the most expensive of the CryptoPunks happens to be CryptoPunk #7523, also known as Covid Alien, a pixelated avatar with a surgical cap and a mask. As mentioned before, there are only nine alien CryptoPunks available out of the 10,000 unique collectible characters, so these digital assets continue to create a lot of hype, even in 2022. Sadly, a certain German museum won’t be able to attest to the popularity of these NFTs after a rather recent Cut-and-Paste blunder. 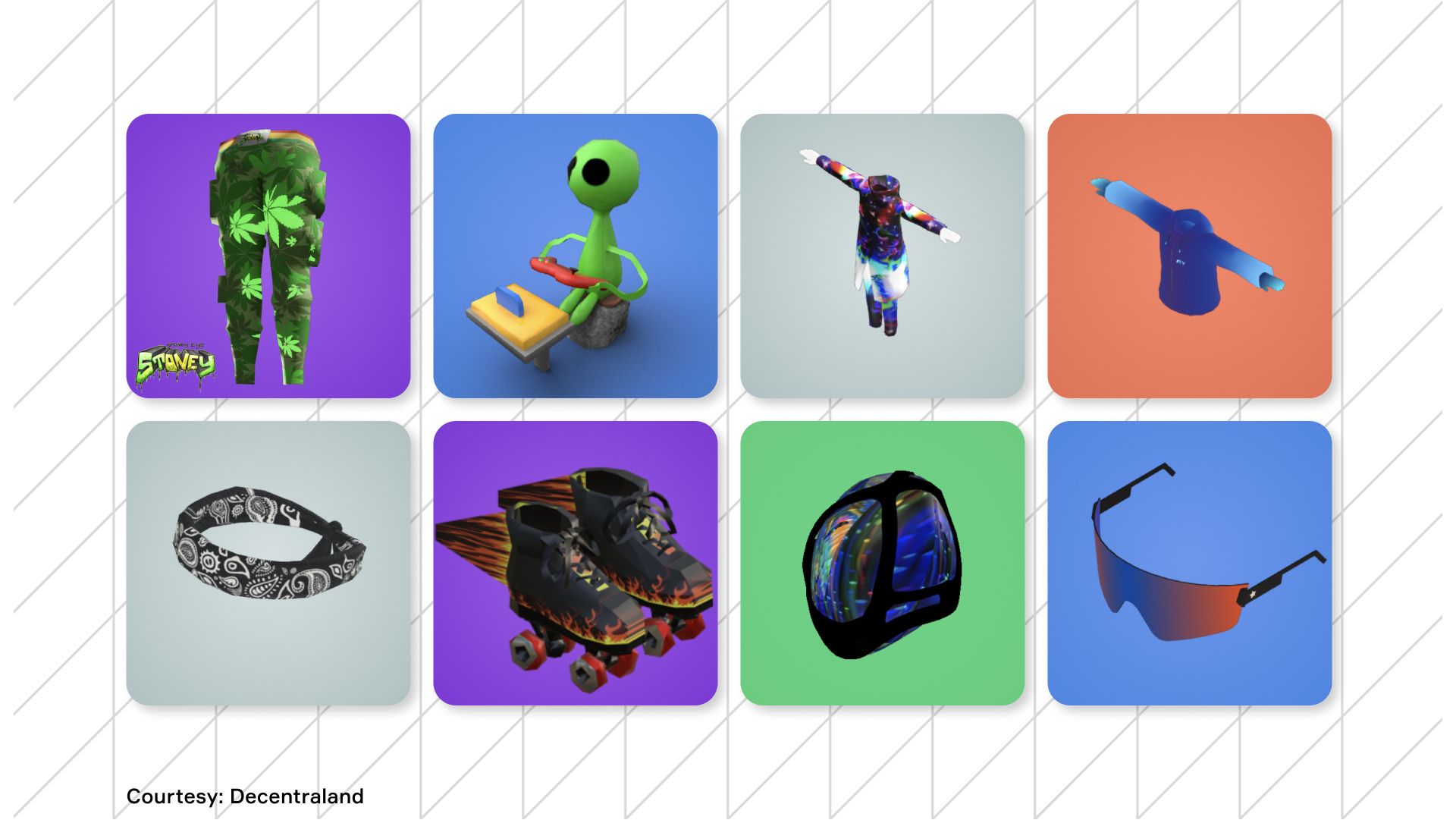 Genius investment for some, Bizarreville for others, much can be (as has been) said about the concept of virtual lands. Whatever your stance on this crypto world project, plots of land in Decentraland are selling for millions and brands like Nike and an assortment of luxury brands setting up shop in this metaverse. The trend doesn't seem to be going anywhere in 2022 as more investors and crypto investors jump aboard Decentraland. The number of pieces of land, sold as NFTs, on Decentraland is capped at 90,000 and prices have jumped by as much as 400% to 500% at the end of 2021. With a platform with a massive potential for digital opportunities, from fashion and art to business and gambling, it’s only understandable why Decentraland NFTs continue to be as popular in 2022 as they’ve been for the past two years.